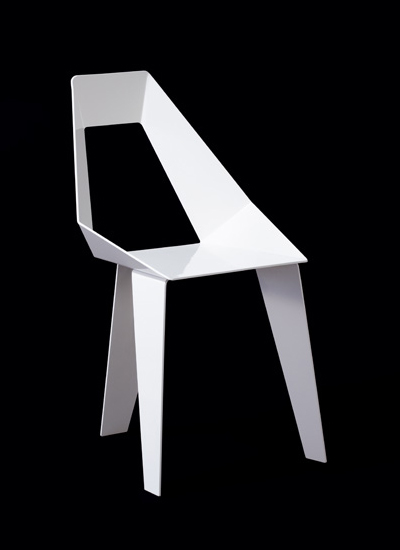 The Axiome Chair is a key object. It was Thomas Feichtner’s first experimental object. A number of designs lead back to this chair in formal terms, e.g. the drinking glasses ”Two Axiomes in Rotation“ by J&L Lobmeyr. Also the 2007 exhibition of the same name at the Museum of Applied Arts (MAK), Vienna, was named after this design. One might say that the Axiome Chair sums up the creative mind shift in approach. Thomas Feichtner sees axiomes as a counter strategy to an economically motivated understanding of design. The design focuses on the cultural and artistic aspects, on development of the formal concept and break with a functionalist approach. The chair must also be understood as a formal opposite to the organic form that was predominant in design at that time. At the same time the chair does not observe the ergonomic or semantic precepts of general design theory but deliberately defies the requirement of industrial usefulness. The design looks uncomfortable, but when you sit down, you will feel how each surface supports your body and your body weight is distributed evenly and comfortably to the backrest. Starting from the seat element the shape tapers toward the small backrest, creating a large open space. This space by itself has the effect of a separate surface and is a central element of the design. The side elements and the backrest and seat element form an angle. The chair has deliberately no tubular steel legs but legs made from the same material as the seat element. The three-leg component is an independent element, also in formal terms.

The sheet metal parts are laser-cut and bent. The metal of the seat element is separated from the leg structure. The two parts are welded together manually. In spite of the simple design a high level of craftsmanship is required. The Axiome Chair is manufactured by Designwerkstätte Schatzl, an Austrian craft firm for contemporary design located in Micheldorf in the Upper Austrian Pre-Alps, which has a long tradition in metal processing. In the past century Micheldorf was the Austrian center of scythe smiths; today it accommodates a scythe makers’ museum. Thomas Feichtner feels strongly attached to this place, which is also the birthplace of his father, Hanns Feichtner. In spring 2006 the Axiome Chair was exhibited at the Triennale di Milano, Milan’s Design Museum, where it attracted much media interest. A number of international exhibition participations followed shortly thereafter. The Axiome Chair was added to the Permanent Design Collection of MAK, Museum of Applied Arts, Vienna.