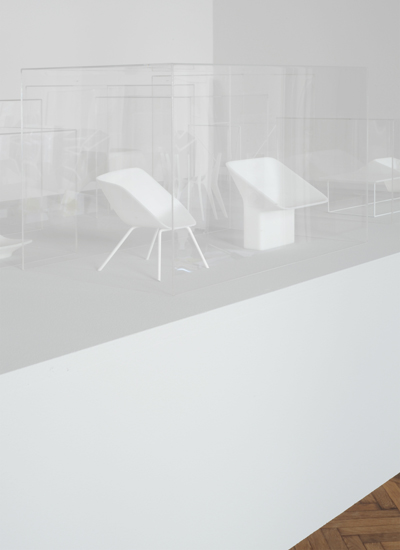 One to Five is an installation comprised of ten previously unreleased chair designs by Viennese designer Thomas Feichtner. All of these are presented as printouts of 3D models done at a scale of 1:5, and they will be shown at the Salone Internazionale del Mobile 2011 in Milan’s Zona Tortona district.

Developing a design all the way from a sketch to a functioning product is typically a long process which sometimes even goes on for years. The models allow the sketches to become three-dimensional objects, but their small scale entails that they remain very much in the design phase. New rapid prototyping technologies also allow concepts to surface for which no concrete approach to realization has yet been developed. In such cases, production techniques, materials and colors remain completely open. This is an experiment which seeks to present designs not as finished projects but rather as processes which have yet to be concluded. Producers can then take up designs and continue their development, thus themselves becoming part of the process almost from the very beginning. This is Feichtner’s open way of working with ideas which, at this stage, typically remain somewhat hidden.