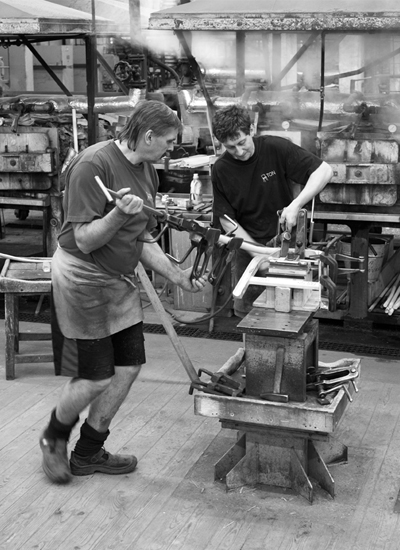 Furniture producer TON is a piece of Czech-Austrian industrial and design history—as well as one of the world’s oldest furniture producers. It was back in 1861 that the Viennese entrepreneur Michael Thonet established a factory to produce his synonymous bentwood furniture in Bistritz am Hostein (today’s Bystřice pod Hostýnem), in what is now the Czech Republic. This was to be Thonet’s largest furniture production site. The company was nationalized one year after the conclusion of the Second World War. During the socialist era that ensued, it was called “Továrna ohýbaného nábytku.” The initials of this name, which translates as “Factory for Bentwood Furniture,” still appear today in the brand’s logo. TON was established as a design brand as part of the company’s restructuring after the fall of the Iron Curtain. Despite having numerous political upheavals and changing ownership structures, bentwood furniture production has continued right up to the present day—without interruption and even still using some of the original machines and molds. Except for felling the trees, the entire production process—from raw timber to finished product—takes place in-house. And despite its 150-year history, today’s TON is a relatively young Czech corporation, producing contemporary (and frequently award-winning) furniture in collaboration with established Czech and foreign designers.

The Tram Chair arose from the TON’s most recent collaboration with the established Vienna-based product designer Prof. Thomas Feichtner. Feichtner’s concept is strongly inspired by the company’s time-honored production processes: first by the company’s own plant for the production of seat shells from molded wood, and second by its longstanding factory for the production of classic bentwood. The intention was to unite the methods used to produce bentwood and molded wood for the first time in a single product, thus building a bridge between traditional and contemporary furniture design. Even just the way in which the bentwood braces are connected indicates the finished product’s origin. On the other hand, the Tram Chair also features a few constructional innovations. The support for the seat shell, for instance, does double-duty as a connection between the legs. The chair thus needs no further bracing, in contrast to classic bentwood models. Though this chair’s design is quite deliberate, its name came about as more of an accident. Employees of TON were quick to jokingly dub this model the “tram chair” due to its similarity to the plastic seats on the trams in Prague. Feichtner then decided to keep this charming working title as the product’s name.

The Tram Chair will see its first public presentation at the 2013 Milan Furniture Fair. It will be offered for sale with and without armrests, with cloth or leather upholstery, and in various colors and types of wood.